How long does it take for moonlight to reach us? Just over one second. And sunlight? Eight minutes.

In November 2019, I visited a real (not virtual) art gallery and experienced (in real life, moving through and looking at) the exhibition  Hold Everything Dear by Harja Waheed.  It was at the Power Plant in Toronto and I went with daughter April and now, over a year later, I am reflecting on that experience.

The artist showed a variety of media: ceramics, textiles, installation, video, and works on paper.

Her use of sunned paper started when she was in art school.  Unable to afford traditional art papers, she scrounged the display papers that stationary shops had in their windows.  The shops eventually saved paper for her, as they couldn't sell it.  She still visits shops and bookstores when she travels and collects 'sunned' paper.

We are living in a time where it is becoming difficult  to identify fact from fiction.

"allowing objects to speak for themselves, allowing histories to infuse one another and viewers to steep in the mystery of interconnected clues, creating just enough tenuousness or uncertainty in order to leave space for viewers to come to the work from their own perspective and histories - these all remain urgent bottom lines for me, allowing for possibility, imagining and reimagining." Hajra Waheed

One body of work in the exhibition are fragments of starry sky-scapes displayed on shallow shelves.  The words in the title, Starry Night, remind us of the expressionism and wonder we associate with Van Gogh.
"I am interested in the space of not knowing.  We are so used to going to an exhibition and having a set beginning and end, where every gesture has been clarified and every mark has been noted.  But that is not as important to me as an affective experience."  Hajra Waheed

"I see my practice as a slowly unfurling process, a chronicle or story that reveals itself over the course of a lifetime rather than within the space of one exhibition. Each body of work is borderless, porous, temporally unbound,  not limited with some discernible end-point."  Hajra Waheed

The artworks in the set of work entitled Letters 1-8 were inspired by John Berger's novel that uses the device of love letters entitled  from A to X .  Waheed's series of letters combine careful drawings of palm leaves and personal notes.

I felt Hajra Waheed's poetic sensibility as I moved through the several rooms containing the exhibition.  The title,  Hold Everything Dear, is borrowed from the British art critic and novelist John Berger's 2007 book of essays.  Other key texts that inspire the artist are: Rebecca Solnit's book of essays Hope in the Dark and the non-fiction of Arundhati Roy.

The exhibition is quite political yet I was able to understand it on a personal and emotional level.

There is hope in the room.  Moving slowly along side the many different items we feel an invisible web-like connection.  The guest curator, Nabila Abdel Nabi explains that that the artist considers all her work as if it is in a spiral.  A spiral that is felt, not seen.

The spiral is more than just a form, it can denote evolution and involution, it expands and contracts, it reveals and it hides, it does not settle or occupy, it does not want you to believe it is invulnerable, it is a study, not an art, it is smoke entering the air, it is our umbilical cord, it is the form found in heart cells, it is the form found in nerve cells, it is never redundant, it is the act o remembering, it is a compass that allows us to stand in the center of a storm, it is the belief that what we do matters, it represents the awareness of the self,  it is about keeping an open heart in the face of a broken one.
(only some of the text read by the artist at this link. )
There is enough space in the exhibition to allow us to make our own connections.
Posted by Judy Martin at Saturday, January 09, 2021

sunned paper ... what a unique turn of phrase

and given the incredible intensity of our Texas sun, your post has sparked in me a notion to try solar discharging using local plant materials and some recently obtained black linen

thank you for the inspiration!

Hi Judy,
I read through your thoughts and memories to this wonderful exhibition and had the feeling I know her. And yes I saw Hajra Waheed´s work on the biennale in Venice 2017. It was a wonderful quiet room - near to Kiki Smith work. The whole atmosphere was meditative. There she presented the work : a short film 1-321. I was fascinated. Many thanks to bring me back to this work.

“...a slowly unfurling process...” in art and life. Words to hold close. Thx Judy and HW. 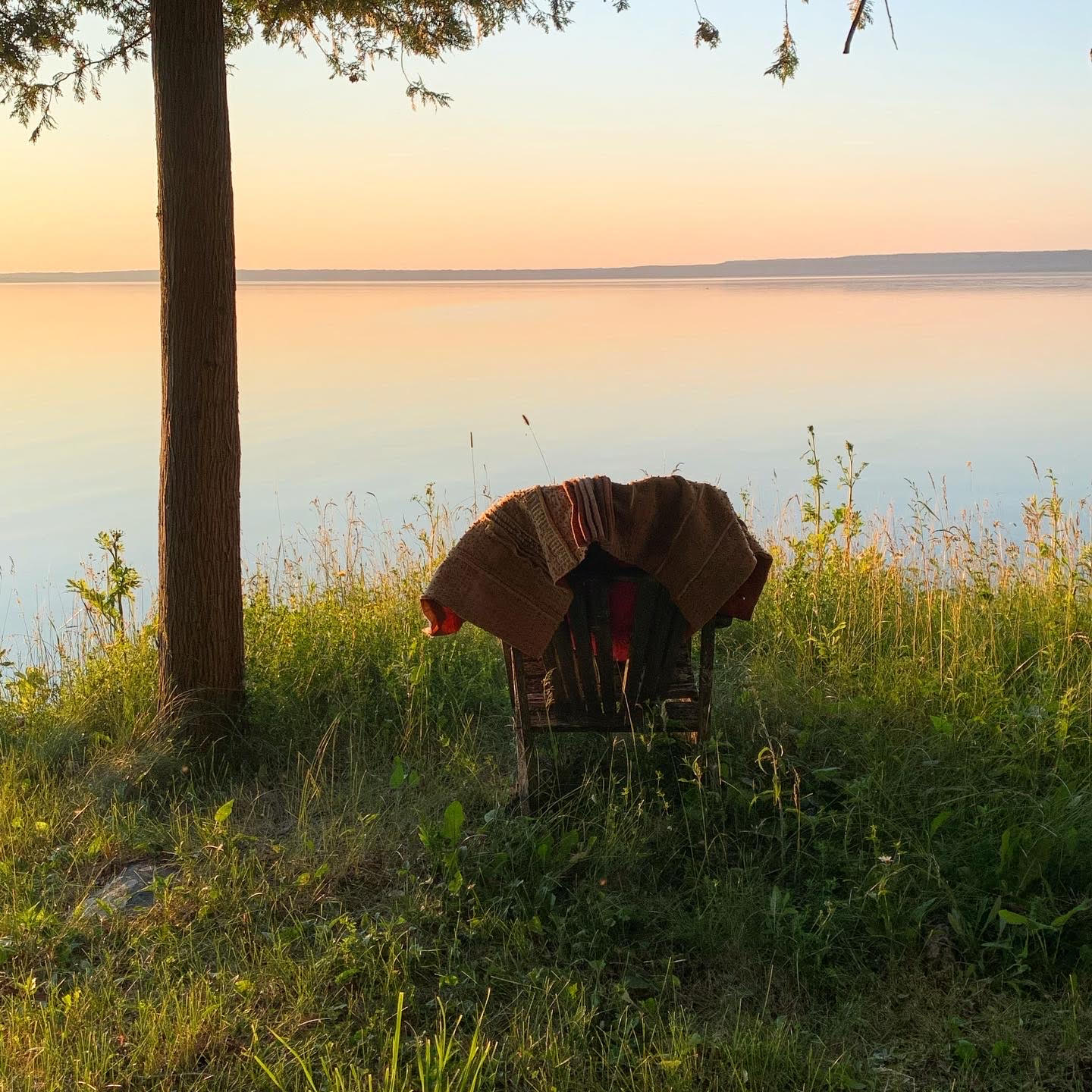 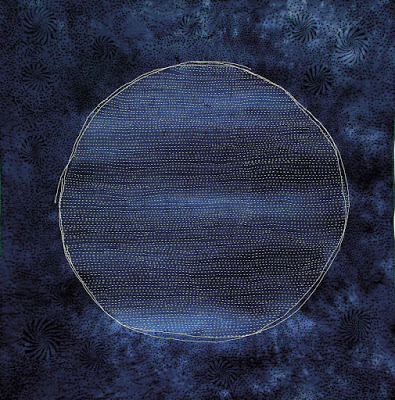 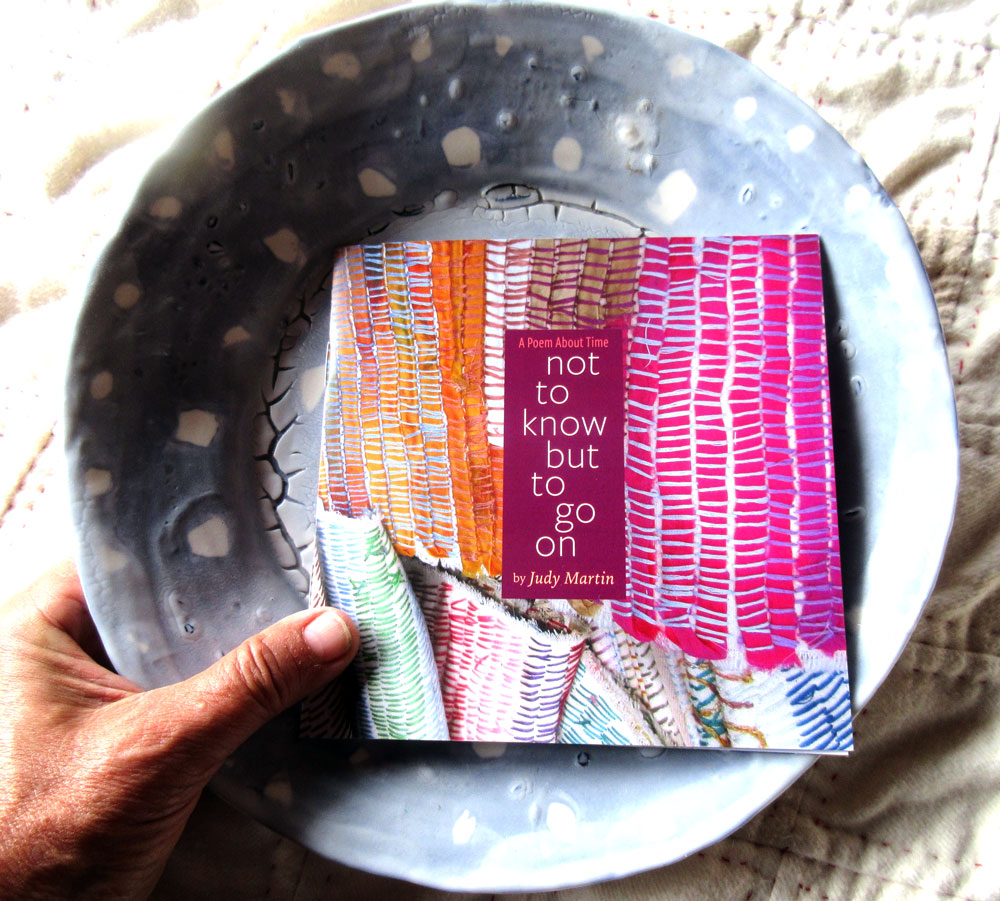 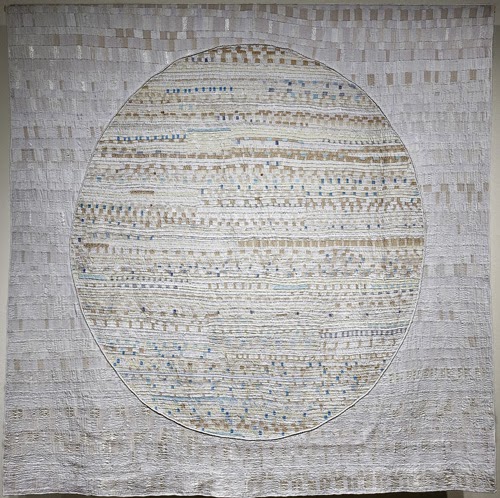 This 90 inch square meditation panel is made from re-purposed linen damask table linens and new silk. It was created by Judy Martin with the assistance of 140 members of her local community over a period of four years. Mended World is part of the exhibition Masterworks: Abstract and Geometric, organized by SAQA, curated by Martha Sielman. Click on the image and follow the links to hear Judy Martin speak about the Manitoulin Circle Project.